skip to main | skip to sidebar

Spring is over and it's time to share the upcoming summer events. The Arizona desert is heating up and today is supposed to be 100 degrees and it is only May 15th!!! My recovery from knee surgery mentioned in my last newsletter is coming along great, although I am still limited to no hiking or sports for another 4 months or more. The timing of it all wasn't too bad, because I am now up and about and ready for a summer season full of travel. After 4 weeks of crutches and 2 months of rehab I am just happy to be walking.

The first week of June seems to be the kick off date to my summer. On Friday, June 6th I have a 2 man exhibit at Art on the Boulevard in Vancouver, WA along with teaching a weekend workshop in conjuction with the show. The 2 man show will be with my good friend Mike Rangner, and should be a great one with more than 35 paintings exhibited between the 2 of us.

The exhibition details, postcard, plus a few image 'teasers' are as follows: 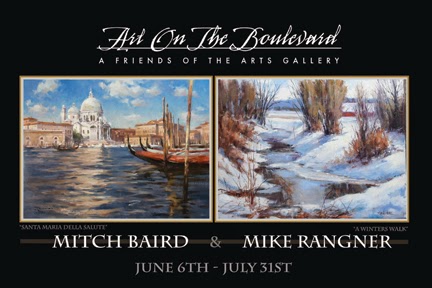 The 2 day plein air workshop held in conjuction with the show will be on June 7th & 8th on beautiful Sauvie Island and will include access to private properties.  If you have never been to Sauvie Island, it is full of wildlife preserves and pristine farms surrounded by and infused with waterways.  The workshop will be limited to 15 students to ensure individual attention and is $250 for both days.  I have a few slots still open.  If you are interested in securing a slot or have any questions, please see my website workshop link at www.mitchbaird.com or contact me at mitch@mitchbaird.com.

June 6th will also mark the opening date of the Oil Painters of America's National Exhibit at the world class Bennington Center for the Arts in Bennington, VT. My painting 'Sketching in the Boatyard' was juried in and I am honored to be part of the show. It is a painting of my good friend, Eric Jacobsen, who was a great subject in a fantastic setting. The sailing crafts alone, in any old boatyard, are usually eye candy enough for me but I couldn't resist capturing the light on my friend as well as him capturing the scene.

Sketching in the Boatyard
Oil
20x30

For more information on the exhibition and works you can go to:
www.oilpaintersofamerica.com/events/exhibitions/2014/national/index.cfm

I will also be teaching a few workshops in August through the Scottsdale Arists' School in Scottsdale, AZ. The first will be a weekly class for 3 weeks starting August 8th through August 21st. It will be held each Thursday from 9am - 12pm and will be on 'Design Concepts'. You can find the details at:

I will also be offering a 3 day intensive from August 26th through the 28th from 9am - 4pm on 'Learning to See Your Subject'. You can find the details at:

Other events that I will be participating in this summer include:

You can find more details on Evergreen Fine Art's website at:

You can find more details about the event at:
www.rmpap.org

I will keep you informed of the other events on the horizon as the details are comfirmed. I hope you are looking forward to a great summer and hopefully we can catch up if we meet at any of these events. All the best from the studio.